Kostas Paniaras – “The ambivalence of Memory”

The theme of this year’s exhibition evokes the inherent identity of a museum, which by definition is the space where memory is preserved and highlighted.

The Archaeological Museum features a group of works overpainted by the artist Kostas Paniaras. These works serve as his personal comments on the museum’s exhibits. The ‘Ambivalence’ of his memory shows through, affirming and treating the ambiguity of history.

As a Greek artist, Kostas Paniaras strives to deal with a prodigiously large cultural heritage, the burden of a long past. His works have as their starting-point the often abused plaster copies of symbols of antiquity; yet he also begins with authentic museum exhibits. He indiscriminately insinuates himself in all of these: he overpaints them, bisects them, multiplies them. He renders clear, discernible, and recognisable the theme of historical memory and its consequences.

The works by Kostas Paniaras have been selected first on the basis of their ‘archaeologcial interest’. At the same time however the selection focusses on the treatment of memory— collective and personal—which also often turns tyrannical. The artist’s ‘Ambivalence of Memory’ is reflected in the ‘representations’ of select symbols in which he sometimes multiplies the copies (‘The Memory of Night’, 1984), and sometimes bisects them (‘Day and Night’, 1984). He thus expresses the desire for proud national continuity but also the need to be freed from from the dead weight of history.

The relationship and dialogue of Kostas Paniaras with the ancient world have characterised his work for many decades. They surface unexpectedly; for instance, the ‘Package for an Unknown Recipient’, a parcel box with a red interior, contains a copy of the head of Hygieia. This work, one of the artist’s last before his death in 2014, suggests the nature of his own questions.

What is more, especially in his recent works he presents the contemporary debates about the uniqueness and incommensurability of a work of art: the question of how images of the most famous, unique, and invaluable works in museums—the landmarks of world heritage—change over time and are conveyed. Thus, the three-part section ‘Aphrodite’ (2012-14) can be assigned to three different sources. ‘Aphrodite III’ starts off from an overpainted, mass copy in sculpted form of Venus rising out of the sea from Botticcelli’s well known Renaissance painting, with its allusions to ancient Greek mythology. The subsequent anonymous maker of the mass object not only copies the original in an arbitrary way, he also changes its identity, turning a painting into a sculpture. In his second Aphrodite, ‘Aphrodite I’, Paniaras has ‘severed’ the head and part of the body; the work has Aphrodite of Melos as its starting-point. A third Aphrodite, ‘Aphrodite II’, takes its cue from Aphrodite of Rhodes, a late Greek adaptation of the famous Crouching Venus of the 3rd century BC. The world famous head of Alexander the Great is represented as an item of food in a deep blue dish—a classic Greek symbol that has changed, having been wounded and worn by time, use and abuse.

As an international Greek artist, Kostas Paniaras searches for the global message of Greece’s cultural legacy. At the same time he strives for a new, private definition, an individual approach to the reality of Greek history. This search is visible and detectable in the works now displayed in the Archaeological Museum.

This year, the Archaeological Museum of Poros is hosting Kostas Paniaras’ visiting exhibition as one of the events organised by the Ministry of Culture and Sports to mark International Museum Day. This exhibition, which is coorganised with Gallery Citronne, features a group of art works that have as their point of departure some of the best-known sculptures of antiquity. The head of Hygieia from Tegea and the bust of Alexander, both works of the late classical period, Aphrodite of Melos and the Crouching Aphrodite of Rhodes, sculptures of the late Hellenistic period, as well as Botticelli’s Venus, which is based on the Hellenistic sculptural archetype of ‘Venus of modesty’, were created at different periods and for different reasons. But from his personal visual perspective, Paniaras approaches these works collectively as symbols of the ancient Greek world, which can be perceived by fragmentary and often intrusive collective memory. Ancient statuary, having survived usually splintered, plundered or reused until recently, now belongs to the cultural heritage of the world and is subject to multiple readings today.

In his works Paniaras expresses the contrast between diachronic and unimpeachable value as represented by ancient Greek sculptures and the fleeting, momentary event recalled by flowing drops of colour. He thus gives rise to the play between established, world renowned form and the subjectivity licensed by art. The sculptures overpainted with red and blue create the impression of a waxen surface, recalling the material used to make manikins for sculptures, as if the artist were trying to restore these ancient statues to their original form.

Surrounded as they are by statues of classical, Hellenistic, and Roman times, Paniaras’ works have a special place in the permanent exhibition of the Archaeological Museum of Poros. The museum houses finds from the area of Troezen, whereaccording to written evidence Aphrodite was worshipped and invoked as kataskopia (‘Spy’) and Nymphia (‘Nuptial’) and Hygieia had a cult in the healing complex of the Asclepeion: the finds are arguably ideal partners for a fruitful dialogue between ancient and modern artistic creation. The boldly overpainted surfaces of the modern works stand out against the white of the now discoloured marble sculptures of antiquity, which are spectators of their own effects.

Μaria Giannopoulou,
h.D. (Archaeology) Ephorate of Antiquities of Piraeus and the Islands 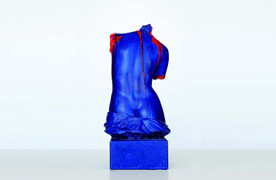 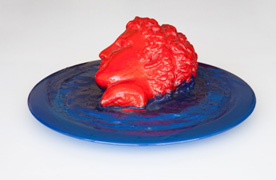 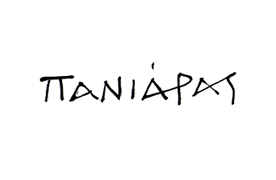 See what the press wrote
about the exhibition

Due to a temporary lack of special ticket packages, be informed at the local ticket office for availability.